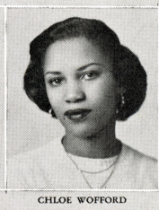 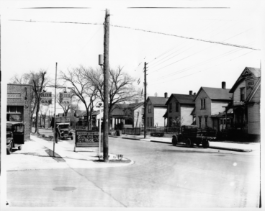 When Toni Morrison became the first Black woman to win the Nobel Prize in Literature in the fall of 1993, there was much excited discussion among Lorain residents as to the best way to honor her extraordinary achievement. Should Lorain High School, her alma mater, be named for her? Should a Lorain park be named for her? Or the public library where she once worked – should that be renamed for her instead?

Toni soon contacted the local newspaper. Her wish was for none of these things. Her request was that the Main Library of the Lorain Public Library System, the building where she spent much her childhood and youth satisfying her deep hunger for books and literature, build a reading room where, she told a reporter, there would be “comfortable, upholstered chairs”; a room where people, especially young people, would “have an opportunity to make their own acquaintance with books… Books are intellectually challenging. Books make you confront things. They make you discover things that would have gone undiscovered.”

With the approval of the library board and the help of a grant from the Nord Family Foundation, the Toni Morrison Reading Room was created. Toni Morrison attended the dedication of the room on Jan. 22, 1995. Her son Harold (Ford) Morrison and many members of her extended family were also in attendance. Noted poet Sonia Sanchez, a close friend of Morrison’s, read a poem she wrote in honor of the occasion. “The gods call out to you this afternoon, my sister”, Sanchez called out to Toni Morrison and to those in attendance that day. “God knows you’ve returned home.”.

Over the next three decades, the Toni Morrison Reading Room would be visited by readers and scholars from Ohio, from across the United States and even by visitors from around the world. These readers and scholars always want to learn more about the young girl from the poorest of Lorain neighborhoods who became one of the world’s greatest authors, a writer who in interview after interview, made clear that the origins of her literary talent lay in this industrial city on the shores of Lake Erie.

Toni Morrison died in New York City on Aug. 5, 2019. In the fall of 2019, Lorain Public Library System officials led a renovation of the Toni Morrison Reading Room. The room was re-dedicated in a ceremony held on Feb. 18, 2020 on what would have been Toni Morrison’s 89th birthday. 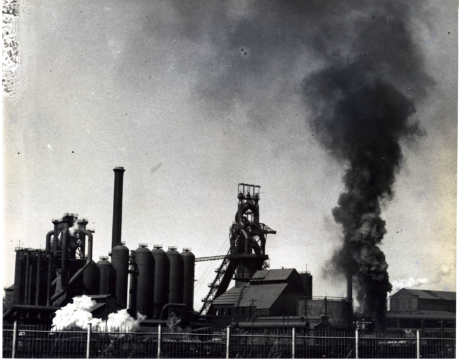 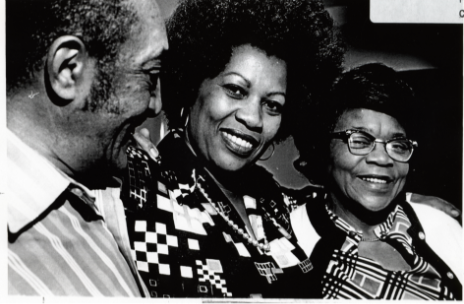 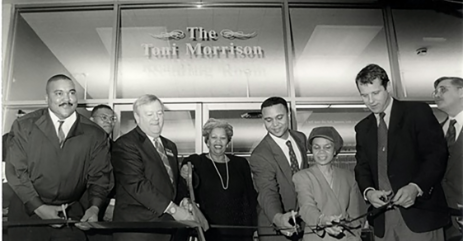 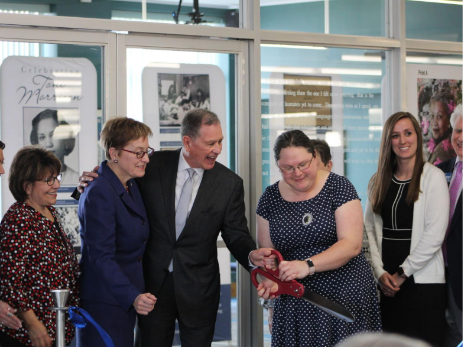 The Toni Morrison Reading Room is located on the first floor of the Main Library of the Lorain Public Library System. As you enter the library, the reading room will be to your left. The door to the room is located in a glass wall which is etched with an excerpt of the speech Morrison gave at the Nobel Prize ceremony in Oslo, Norway on Dec. 10, 1993.

As you pass through the glass doors, your gaze will immediately fall on several large cushioned chairs - the “comfortable chairs” Toni spoke of in the interview.

The bookshelves on the left side of the room hold a collection of Morrison’s writings, which include not only her novels, but the childrens’ books she co-authored with her son Slade Morrison and her non-fiction essay collections. A small number of Morrison’s novels published in foreign languages are part of the collection and were donated by Morrison herself. Also, on the bookshelves is literary criticism written about Morrison, along with some books on African American culture and history.

Toni Morrison was not only one of the great writers in literary history, but a pioneering editor at Random House. The library is currently actively collecting books edited by Morrison, including authors Angela Davis, Toni Cade Bambara, Gayl Jones and Henry Dumas. Some books by these authors can already be found on the Morrison Room bookshelves.

There are two flat glass cases in the bookcase display. The flat glass case on the center left of the bookcase contains two pens presented to the library by Ohio Governor Mike DeWine on the occasion of the signing of Ohio House Bill 325. Ohio House Bill 325 established Feb. 18, as Toni Morrison Day in perpetuity in the state of Ohio. This bill was co-sponsored by Ohio House Representatives Joe Miller of Amherst and Stephanie Howse of Cleveland.

The flat glass case on the center right of the bookcase holds signed copies of “The Bluest Eye” and “Sula.” The novels were signed by Toni Morrison under her birth name of Chloe Wofford and were inscribed to the library. There is also a copy of the 1949 Lorain High School yearbook opened to the page with Toni’s senior portrait. A copy of the funeral program distributed to those in attendance at the New York memorial service for Toni Morrison is the final item included in the case.

The proclamations issued to the library by state and local officials in honor of Toni Morrison are hung on this wall. Prominent among those is the presentation copy of the U.S. Senate resolution honoring Toni Morrison upon her death. The resolution was co-sponsored by U.S. Senators Sherrod Brown and Rob Portman.

The center wall of the room faces Reid Avenue. Large windows take up most of the space on this wall. However, a letter from Toni Morrison, written on Princeton University stationery in 1994 to then-LPLS Director Kenneth Cromer, is framed and hung on a small section of the wall. In the letter, she vividly describes her excitement about the development of the reading room and indicates a willingness to assist in ensuring that the dedication ceremony be a success.

The wall at the right of the room contains several pieces of visual art.

The next artwork is the director’s copy of the poster for the documentary “Toni Morrison: The Pieces I Am”, which premiered at the 2019 Sundance Festival. The film, directed by Timothy Greenfield-Sanders, a long-time friend of Morrison’s and co-collaborator on previous non-fiction film projects, features photos from the local history collection of the Lorain Public Library System.

On the right of the art quilt is a painting of Toni Morrison by Elyria, Ohio artist David J. Pavlak. The painting was created shortly after Toni Morrison’s death.

Turning the corner to the final wall of the Reading Room, visitors who look up can see four colorful illustrations of Toni Morrison. These illustrations were created by LPLS graphic artist Rob Musser in 2019. The illustrations were used for the winter 2020 issues of the “Connections” program guide. On the lower half of the wall are local and national news articles on Toni Morrison, including a framed copy of the famous Newsweek cover photo and article on Morrison. Also framed is a copy of a local newspaper interview with Toni’s mother Ramah Wofford, along with an article and photo of a visit made by Toni Morrison to Lorain in the early 1980s.

We hope that you find the Toni Morrison Reading Room to be not only a tribute to Toni Morrison and her life, but an inspiration as well.