Read about our renewal levies

Three of our branches are on the May 4,2021 ballot. Voting begins April 6. 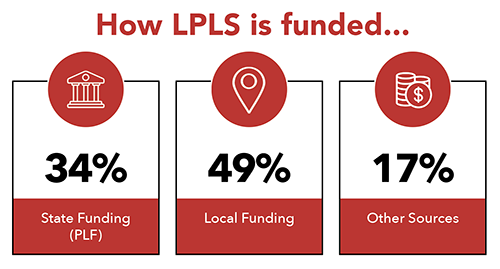 Ohioans love their libraries. With more than 8.4 million registered borrowers, we are proud that Ohio has the highest library use per capita in the United States.

In Ohio, public libraries are partially funded by the state through the Public Library Fund (PLF). The PLF is currently set at 1.70% of the General Revenue Fund (GRF), but it will be cut to 1.66% on July 1, 2021.

The portion of the PLF that Lorain Public Library System receives makes up just 34% of our overall budgets across our system. The rest of the funding comes from local tax levies.

Each community in which we have a branch has its own levy. By law, the funds from that levy must stay within that community and go toward the operation of the branch or branches in that community specifically.

The levies in Lorain, Sheffield Lake, Columbia Station and North Ridgeville expire every five years, meaning we are on the ballot every five years in those communities asking for a renewal. The Avon levy that passed in 2020 is a twenty-year levy and will not need to be renewed until 2040.

The levies for Lorain (Main Library and South Lorain Branch) and Sheffield Lake (Domonkas Branch) were last passed in 2016, so they are due for renewal in 2021 and thus we are on the ballot May 4, 2021.

LPLS prides itself on being a good fiscal agent. We not only use the funding received from the state and local levies responsibly, we also seek grant opportunities to further enhance programming and services that will benefit our communities.

To see a partial list of what LPLS has done with the funding we have received and the community partners we have worked with in just the past five years since the last levy in Lorain and Sheffield Lake, click here: